Use-Cases of this Tutorial

This tutorial explains Intersection Observer API in depth, starting from the basics.

Finding whether the Element is Actually Visible in the Screen ?

Until now, developers have managed it, somehow. The confidence that code will run correctly in all situations, and in all devices, was low.

But now Intersection Observer API has arrived. It has taken care of all such situations, and probably it is one of the most useful Web APIs that have been released recently.

Adding to the good news, all current browsers have added support it — Chrome, Firefox, Edge & Safari. For Internet Explorers and other older browsers, you can use a polyfill without making any separate changes to the code.

Browser viewport and screen are used interchangeably in this tutorial — both refer to the visible part of the browser that holds a webpage.

It will be noteworthy to give a brief description of how visibility of an element in the screen was handled before Intersection Observer API came along.

As an example consider the case of infinite scrolling. To handle infinite scrolling, you will need to place an element (a "Show More" button or an empty <div>) at the bottom of the page, and as the user scrolls the page and reaches that element, more content is appended to the page. So the main issue is to keep track when the "Show More" element becomes visible on the screen, so that more content can be loaded.

The top and bottom properties returned by getBoundingClientRect, along with the height of the screen gives an idea about whether element is visible on the screen or not.

Below are the codes to detect if the element is fully visible on the screen. With a slight tweak to the codes, you can also check for partial visibility.

In addition to handling mathematical calculations in the code (which are prone to bugs), the method also had a lot of performance issues :

This was the reason why Intersection Observer API had to come up.

Fact — All Elements in a Webpage are Rectangles

Before starting the explanation of the API, you must know that all HTML elements are painted as rectanges on the screen. Even when an element looks curved or circular, it is essentially a rectangle internally.

The browser viewport is also a rectangle. 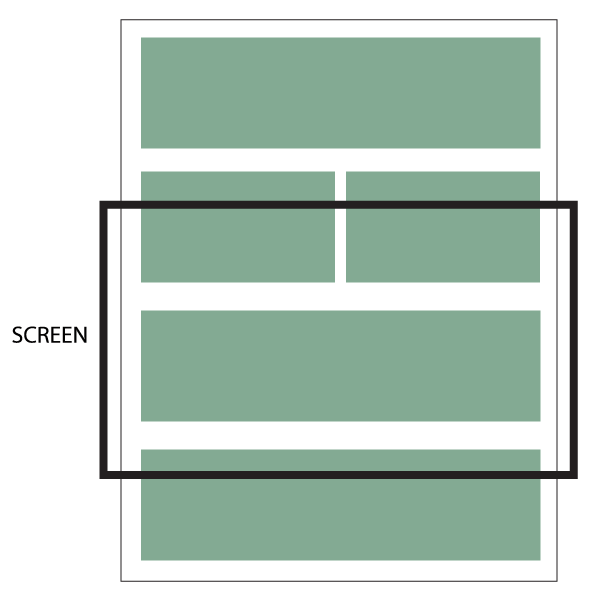 When 2 rectangles are placed together they may intersect (or overlap).

The below images shows multiple elements in a webpage and how they intersect with the screen. 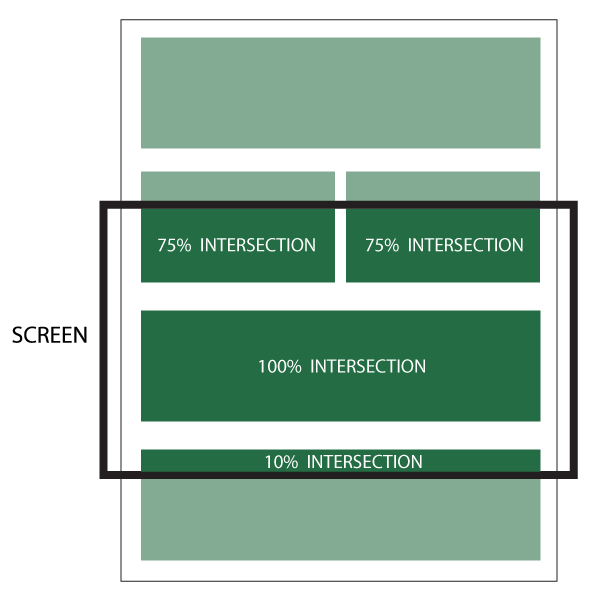 The Intersection Observer API keeps track of intersection between 2 elements in the page. The 2 elements are the target element and root element.

To use the Intersection Observer API you will need to create a new IntersectionObserver object. The root element can be set with the root option property. To set the screen as the root element, you can set root to null, or leave it out.

To start observing the target for intersection, you use the observe method.

Once again, remember, callback is fired when target crosses a threshold in either direction.

It is also possible to observe multiple elements using the same IntersectionObserver object by calling observe for each target.

Note that all targets will have the same threshold and root. If you need targets to have different thresholds or root elements, you will need to create a separate IntersectionObserver object for each of them.

The callback that is fired receives an entries parameter. This is array of objects, and each object in it contains intersection data for one of the target elements (remember you can observe multiple targets with the same IntersectionObserver object).

The most useful properties of the intersection data is intersectionRatio, isIntersecting and target.

See the example code below - it observes a target on thresholds of [ 0, 0.5, 1 ]. root is not set, so browser viewport becomes the root element.

Here is a live demo.

The final option that can be set in an IntersectionObserver object is rootMargin. This is similar to CSS margin property and can be specified in the same way, for example 20px 0px 20px 0px.

What is the use of rootMargin option ? Consider a situation where you like the callback to be executed when the the target element is almost arriving in the screen. Setting threshold as [0] would result in callback execution when few pixels of the target becomes visible. But with rootMargin set, say, 20px 0px 0px 0px, callback will be executed earlier when target is almost on the verge of being visible.

In case you want to stop observing some specific targets, while observing others, you can use the unobserve method.

Intersection Observer API gives a great performance boost because it observes an element asynchronously — observation is not done on the main thread, but rather as a background process.

However the callback is synchronous and executed on the main thread — this means if your callback is performing heavy work, you will not get performance advantage given by Intersection Observer.

Use an appropriate case as per your requirement.